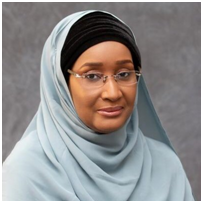 Sadiya Umar Farouq is the Honourable Minister of the Federal Ministry of Humanitarian Affairs, Disaster Management and Social Development (FMHADMSD). The Ministry was created to ensure Nigeria’s preparedness and resilience to man-made or natural disasters and fully institutionalize the various humanitarian, social inclusion and protection interventions of the government.  Sadiya was appointed as the pioneer Head of the Ministry by President Muhammadu Buhari on August 21st, 2019.

Within six (6) months of its inception, the Ministry initiated strategic partnerships to address specific    challenges confronting Persons of Concern. Under her leadership, the Honourable Minister has put in place structures to provide evidence-based and results-driven solutions to social and economic vulnerability in Nigeria.  Furthermore, to address the challenges of implementing humanitarian      action,         the Honourable Minister conceptualized and inaugurated the Civil Security Cooperation (CiSEC) workshop held in Maiduguri aimed at creating synergy in the coordination of Humanitarian actors and Security Agencies in the North East. The workshop produced a Communiqué and the outcomes of the workshop are being adapted into a pioneering strategic framework and roadmap for the coordination of humanitarian interventions across the nation and a prototype for Africa.

Prior to being appointed the Minister, FMHADMSD, Sadiya Umar Farouq served as the Honourable Federal Commissioner of the National Commission for Refugee, Migrants and Internally Displaced Persons (NCFRMI) from October 2016 to August 2019. During her tenure at NCFRMI, she successfully positioned the Commission as the leading government agency responsible for coordination, protection and assistance of Persons of Concern (PoC).  She also worked diligently to review and re-enact the bill for the National Commission for Refugees, Migrants and Internally Displaced Persons, which was passed by the National Assembly.

Sadiya Umar Farouq’s political career commenced in 2002 with her appointment as the Accountant and Administrative Officer of the Buhari Organisation. She went on to hold the post of National Treasurer of Congress for Progressive Change (CPC) between 2011-2013, effectively  and efficiently managing the campaign funds for the party. Following the merger of CPC, ANPP and CAN which metamorphosed into the All Progressive Congress (APC), she was appointed the interim National Treasurer of APC in 2013. She played a pivotal role in the 2015 and 2019 Presidential Campaign as a member and Head of Election Planning and Monitoring for the APC Presidential Campaign Council.

Sadiya’s journey in public service began in 2003 as Administrative Officer at the National Assembly Service Commission (NASC) in Abuja, tasked with the responsibility of overseeing the daily administration of NASC. She rose to the position of Senior Administration Officer at her departure in 2010.

Sadiya, an indigene of Zamfara State, began her formal education at the Federal Government Girls College in Gusau, Zamfara State where she also completed her early education.  She holds a Bachelor of Science degree in Business Administration with specialisation in Actuarial Science (1998), a Masters in International Affairs and Diplomacy (2008), and a Master of Business Administration (MBA) (2011), all from the prestigious Ahmadu Bello University (ABU), Zaria, Nigeria