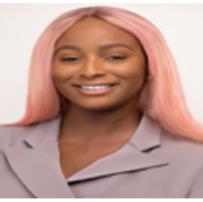 CELEBRITY PHILANTHROPIST OF THE YEAR AWARD

Florence Ifeoluwa Otedola, popularly l‹nown as ‘DJ Cuppy’ and referred to as ’Cuppy’ in her humanitarian endeavours, is a musician, young entrepreneur and a globally recognized philanthropist. Born in Lagos, Nigeria in 1992, Cuppy’s philanthropic endeavours began in 2015 with her ’Cuppy Takes  Africa ’in partnership with The Dangote Foundation, where she visited and donated musical instruments to various girls’ school and centres for women across Africa.

Her strong passion for tackling issues surrounding young females, education for girls and persons with disabilities led her to birth THE CUPPY FOUNDATION

Going beyond the music,  giving back to society is a priority for Cuppy as she uses her global status and platforms as a voice to address social issues.

Through her organization ‘The Cuppy Foundation” Cuppy plans to improve the quality of life of persons with disabilities as well as ensure equal access and opportunities for young girls in Africa. Cuppy is also the founder of the initiative “Cuppy’s 10” where she supports the education of ten impaired and physically challenged students