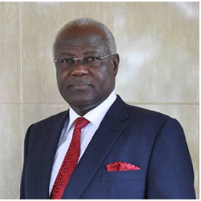 Ernest Bai Koroma (born 2 October 1953) is a Sierra Leonean politician who served as the fourth President of Sierra Leone from 17 September 2007 to 4 April 2018.

Born and raised in Makeni in northern Sierra Leone, Koroma spent more than 24 years working in the private insurance industry before entering politics in 2002. From 1988 to 2002, he was the managing director of the Reliance Insurance Trust Corporation (Ritcorp).

Koroma earned a bachelor’s degree from Fourah Bay College in 1976; and is an insurance agent by profession.

Koroma was elected as leader of the All People’s Congress (APC), Sierra Leone’s main opposition party, on 24 March 2002, after defeating then-incumbent APC leader Edward Turay. Koroma stood as the APC candidate in the 2002 presidential election but was defeated in a free and fair election by incumbent President Ahmad TejanKabbah, who won 70.3% of the vote, to Koroma’s 22.35%.Koroma conceded defeat.

Koroma was later elected to Parliament, representing his home District of Bombali from 2002 to 2007. In 2005, he was elected the minority leader of Parliament and remained in that position until his election to the presidency in 2007